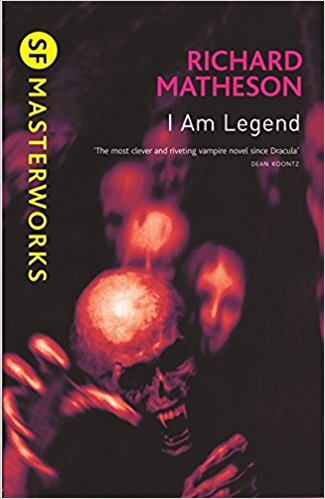 An acclaimed SF novel about vampires. The last man on earth is not alone …

Robert Neville is the last living man on Earth … but he is not alone. Every other man, woman and child on the planet has become a vampire, and they are hungry for Neville’s blood.

By day he is the hunter, stalking the undead through the ruins of civilisation. By night, he barricades himself in his home and prays for the dawn.

Okay, before I begin the actual review, let me just say this one, crucial thing; if you haven’t read I Am Legend because you watched I Am Legend the movie with Will Smith and a stupid, confusing ending…well, banish whatever notions you had about the book right now. They are two completely different entities. The book and the movie share a title, the protagonist of each share a name and there’s vampires…the similarities end there (although admittedly, on paper (or on screen, wah brackets within brackets…braception?) it does sound like they’re very similar).

I Am Legend is an interesting book. Clocking in at a mere 160 pages, it’s a book that’s a unique blend of sci-fi and horror and is a book that has inspired contemporary well-known horror authors such as Stephen King and Dean Koontz. Hell, if that isn’t an endorsement then I don’t know what is!

Now, this might be controversial to say, but the book didn’t blow me away (hey, that rhymed!). I Am Legend was first published in 1954 and since then, a lot of horror novels have been published. It’s not so much that I Am Legend is bad or boring, it’s more I’ve become desensitized to horror because it’s such a prevalent genre in the 21st century. Had I read this book upon its initial publication, sure, then I might have found it truly terrifying. The notion of a mysterious illness that turns people into the literal walking dead, an illness with seemingly no preventative measures or cure…it does sound like a scary premise for a book and it was…back in 1954. This isn’t so much a flaw of the book, this is more a flaw with me, its reader.

One thing I did really like about I Am Legend, though, is Robert Neville’s flashbacks. Seeing the life he’d had juxtaposed against his current situation served as a way of demonstrating to the reader just how much he’s lost. I think for me, some of the real horror lay in the fact that he’s completely and utterly alone with only his painful memories to keep him company. I may be generalizing here, but the idea of being alone is a frightening prospect for many people.

In terms of the narration, I initially found Neville’s thoughts quite difficult to follow, but upon reflection, I think the way in which his thoughts seem jumbled and nonsensical is a way of demonstrating how his loneliness is affecting him. The narration is a mirror image of Neville’s thoughts and, as a result, a reader really gets a sense of his confusion, fear and sheer frustration. It’s a form of narration that really gets a reader empathizing with him and books that allow a reader to walk in the shoes of another are books that are well written.

Overall, a cleverly, well-written book but not one I found overly scary.

Now, before I sign off this review, I propose a fun drinking game! It’s called Neck-a-shot-everytime-Robert Neville-spills-his-whisky-or-throws-or-breaks-his-whisky-glass. Let’s see how many of us can get past the third chapter!

This book is available on Amazon in both e-reader and paperback format.

16 thoughts on “‘I Am Legend’ Richard Matheson”

Review ⭐⭐⭐⭐
Cheating on Frankenstein this evening with a new book and B&Q's bathroom catalogue 😂
After a shitty day mood wise yesterday, I decided to take my book to Starbucks and treat myself to coffee and lunch today. Put on some makeup and an outfit I liked and managed to get 8,000 steps in there and back. Today has been a good day so far 😁 Now for some blogging on the balcony. What are you doing today? Also, excuse the rat cages in the background in the second photo 🐭
Life's too short to read bad books, so I've decided to abandon my current read and move onto Frankenstein instead. Also, I don't know why Penguin opted for this picture for the cover. It hardly looks like a man who's an amalgamation of different corpses 😂
Review ⭐⭐
Winter was my favourite season growing up, but now it's all about spring and summer. It's pretty overcast today, but it's still lovely and warm so I'm spending my lunch reading on my balcony 😍 I started And Every Word Is True today. What are you currently reading?