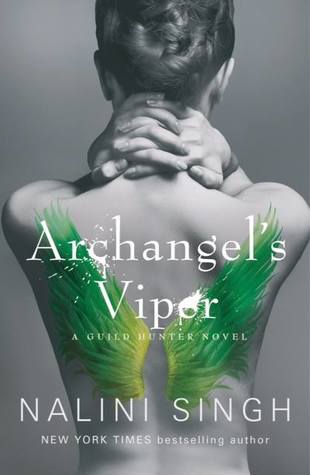 Once a broken girl known as Sorrow, Holly Chang now prowls the shadowy grey underground of the city for the angels. But it’s not her winged allies who make her a wanted woman – it’s the unknown power coursing through her veins. Brutalised by an insane archangel, she was left with the bloodlust of a vampire, the ability to mesmerise her prey, and a poisonous bite.

Venom is one of the Seven, Archangel Raphael’s private guard, and he’s as infuriating as he is seductive. A centuries-old vampire, his fangs dispense a poison deadlier than Holly’s. But even if Venom can protect Holly from those hunting her, he might not be able to save himself – because the strange, violent power inside Holly is awakening . . .

No one is safe.

Considering the Guildhunter series is one of my favourites and Archangel’s Viper was released back in September, it has taken me a hell of a long time to get around to reading it…was the wait worth it?

Yes and no. Let me explain.

The Guildhunter series began way back in 2009 and the first book is the book in which we, the readers, first meet Holly. I was a bit of a latecomer to the series, reading Angel’s Blood in 2014, but throughout the next eight books, I always found myself wondering about Holly and Venom. There was just something beneath the taunts that they threw at one another, something other than simple contempt and resignation in being lumped with one another for Holly’s training.

And in Archangel’s Viper, the truth is revealed. These are two people unlike anyone else in the brutal Guildhunter universe. Venom, a vampire with snake-like eyes and impossible speed and agility and Holly, a not-quite-vampire cursed by the tainted essence of Uram, an archangel gone mad (understatement of the year *laughs nervously*)…these are two individuals who both captivate and horrify those around them, but find understanding and acceptance with one another, even if it is begrudgingly prior to this book.

The storyline itself is great. Holly may be a fictional character, but seeing her evolve from the broken, self-named Sorrow into the rainbow-haired, badass woman that she is now has been incredible. Strong female characters are often lacking in paranormal romance fiction, but the Guildhunter series is full of them…from Elena to Honor, from Ashwini to Mahiya, from Michaela (whose a bitch, but is still amazing) to Lijuan (who you can go on a date with here). There isn’t a single woman in these books – mortal, angel or vampire – who isn’t powerful in her own right and what makes these books even better is that the men in this series support them 100% and don’t feel ’emasculated’ by the fact that their female friends and partners can stand their own ground.

The romantic element to Holly and Venom’s relationship was an ember that didn’t get stoked into a raging fire until about 80% of the way through the book (I was reading on Kindle). There was a lot of teasing and a lot of suggestive comments, but Venom didn’t start making her samosas or chai tea from scratch until the near end and while these scenes were touching in all their sweetness and cuteness…it just felt a bit rushed. Venom letting down his defenses and telling Holly about his past and about his Making seemed to come out of nowhere. I just feel that if Archangel’s Viper had been maybe fifty pages longer, I could have believed in their relationship more.

I felt the same about a specific plot element; the bounty on Holly’s head seems to play an integral role in the story as she and Venom prowl the dark underbelly of New York, searching for information regarding the person offering five million for her. They get sidetracked by other things (which I won’t reveal because it’d be a major spoiler), and the whole thing is forgotten about until the end of the book, when it’s quickly explained that it was merely a ‘flunky’ in Charisemnon’s court taking a shine to her because of her connection to Uram. What initially began as a major plot element devolved into nothing and was explained away in the space of two pages.

Archangel’s Viper isn’t my favourite, but it’s a good addition to a fantastic series.

Song: Nine Inch Nails’ Dead Souls (the lyrics just fit perfectly with Holly, plus it’s on the soundtrack of one of my favourite movies)

This book is available on Amazon in both paperback and e-reader format.

Review ⭐⭐⭐⭐
Had a craft day with one of my best friends today and made this little bookish ornament out of clay 😍 Books and coffee, the perfect combination ❤️
Definitely feels more like something I should be reading on a cold winter's evening, but I'll just have to make do with a rainy summer's evening. This is the second of the two books that I got from the library the other week and I'm really enjoying it so far. What are you currently reading?
Review ⭐⭐⭐⭐
So, I joined Glasgow libraries yesterday and I am LOVING it so far. One of my best childhood memories is going to the library every Friday evening with my grandparents to pick out my books for the following week. That was 20+ years ago, though, and libraries offer so much more than just physical books nowadays. Audiobooks, magazines, eBooks, free (and unlimited) access to online archives such as the British Newspaper Archive, free access to computers, printing services...the list seems endless. If you're an avid reader and you haven't already joined your local library, you definitely should. I don't know how it's taken me four years to join Glasgow libraries, but I'm happy that I have (as is my bank account 😂)
I love watching Lucy Worsley's documentaries but had yet to read any of her books. A Very British Murder was mentioned in an article that I was reading the other day and I knew I had to read it. It was my day off today, so I went for a walk (not the greatest choice I've ever made given how hot and humid it was) and decided to get stuck into the book while enjoying a much needed iced mocha. What are some of your favourite history books? Let me know in the comments!