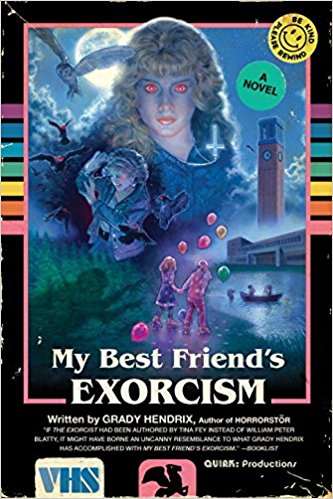 The year is 1988. High school sophomores Abby and Gretchen have been best friends since fourth grade. But after an evening of skinny-dipping goes disastrously wrong, Gretchen begins to act different. She s moody. She s irritable. And bizarre incidents keep happening whenever she s nearby. Abby s investigation leads her to some startling discoveries and by the time their story reaches its terrifying conclusion, the fate of Abby and Gretchen will be determined by a single question: Is their friendship powerful enough to beat the devil? Like an unholy hybrid of Beaches and The Exorcist, My Best Friend s Exorcism blends teen angst, adolescent drama, unspeakable horrors, and a mix of 80s pop songs into a pulse-pounding supernatural thriller.

Now, this is a book I picked up solely based on the cover. I near enough made the decision to buy it before I’d even flipped it over to the read the blurb. It’s all shades of awesome, having been designed to look like an battered, old VHS case, and the story within is equal to the originality and creativity of its cover.

On the surface, My Best Friend’s Exorcism ticks all the boxes for a good, solid (sounds like I’m talking about poop) horror story: dark forces beyond the control and comprehension of the protagonists, blood-curdling scenes which have a reader holding their breath and turning the pages tentatively in open-mouthed horror, characters doing crazy ass things you would never, ever do in real life (c’mon, skinny dipping in the middle of night? Sheesh, that’s a literal recipe for disaster)…but beneath it all, amid all the classic 80s tunes and scenes in which tape worms slither out of people’s mouths, My Best Friend’s Exorcism is an extremely profound novel. It highlights the very real and very often misunderstood trials and tribulations that are part and parcel of being a teenager. My Best Friend’s Exorcism is not just your average run-of-the-mill horror novel. It’s a social commentary chronicling life in a lot of high schools across the world, be it in the 80s (the decade in which this novel is mostly set) or the present day. We see the fragility of friendship through Abby’s relationships with Margaret and Glee, we see how an entire community (in this case, their school) can turn against someone within a split second for the smallest perceived wrongdoing and we see the complexity of love in all its various forms.

The horror element doesn’t really kick in properly until about three quarters of the way through the book. I was wondering whether Abby’s initial assumptions about Gretchen’s behaviour were correct and that she was suffering from a form of PTSD. This initial ambiguity regarding Gretchen’s behaviour is interesting as it leaves readers guessing and demonstrates the lengths Abby will go to to help her best friend.

From a horror perspective, My Best Friend’s Exorcism rises above and beyond its contemporaries. It’s a fresh take on the traditional story of demonic possession and I can’t say too much more because it will detract from the shock value of some of the scenes should any of you guys decide to read it…but I will say this, Good Dog Max!

I’m super excited to check out Grady Hendrix’s other books!

Song: Michael Jackson’s Beat It (kinda what I feel Abby should have sang to Gretchen’s demon during the exorcism…)

This book is available on Amazon in e-reader and paperback format.

Five hour journey today. Perfect time to get stuck into this 😍 I loved Nick Cutter's The Deep, so I have high hopes for this! What are you reading today?
Review ⭐⭐⭐⭐⭐
My current read. What are you reading this week?
Decided to treat myself to a pumpkin spice latte and cookie after my flu jab. Still wading my way through The Deep (pun entirely intended). I'm loving it, but I've just been crazy busy lately. What are you reading today?
After two years (thanks, Covid), I finally got to come down to Lincolnshire to visit my family. It's been a manic, whirlwind of a week, but today I'm going to be chilling in my grandparents' gorgeous garden, listening to the birds, drinking coffee and reading ❤️ I didn't realise how much I needed this week until just now. I honestly feel rejuvenated after seeing my family. My little brother is not so little anymore...he grew to 6'5 in the last two years 😂
On the train to see family and decided to start this seen as it's officially spooky season. Have you read this book? What are you currently reading?